NOAA press release coyly describes the ‘blob’ as a “New Marine Heatwave.” And they use that word over and over and over again. You think I’m kidding? They use the word ‘heatwave’ 19 times, and ‘heat wave’ another three times. Talk about obfuscation! It is NOT a ‘heatwave.’ It is a blob of superheated water, superheated water NOT due to human activity. Rather (as I’ve been saying for years), I blame underwater volcanic activity.

Do you know anyone who owns a swimming pool? Ask them how much it costs to heat it.

Now imagine trying to heat this blob, a huge mass of water which, as NOAA puts it, “stretches roughly from Alaska south to California.” I doubt that all of humankind to could create that much energy in a thousand years.

To try to blame this ‘heatwave’ on human activity would be reprehensible.

And yet, since the planet’s temperature is based on both land and ocean temperatures, you can bet that we will be pounded over and over again with more ‘warmest year ever’ nonsense by power-hungry alarmists.

So please remember when you hear those dire warnings, that it is NOT caused by humans.

Now lets pray that we don’t get a huge above-water volcanic eruption, because that’s how ice ages begin.

The process is amazingly simple.

It’s been going on this way for billions of years, long before humans appeared on this planet.
____________

Researchers are monitoring a new marine heatwave off the West Coast for effects on the marine ecosystem.

About five years ago “the Blob” of warm ocean water disrupted the West Coast marine ecosystem and depressed salmon returns. Now, a new expanse of unusually warm water has quickly grown in much the same way, in the same area, to almost the same size.

The warm expanse building off the West Coast stretches roughly from Alaska south to California. It ranks as the second largest marine heatwave in terms of area in the northern Pacific Ocean in the last 40 years, after “the Blob.”

“It’s on a trajectory to be as strong as the prior event,” said Andrew Leising, a research scientist at NOAA Fisheries’ Southwest Fisheries Science Center in La Jolla, California. He developed a system for tracking and measuring heatwaves in the Pacific Ocean using satellite data. “Already, on its own, it is one of the most significant events that we’ve seen.”

Cold water welling up from ocean depths along the coast has so far held the warm expanse offshore, he said. However, the upwelling, driven by coastal winds, usually wanes in the fall. The heatwave could then move onshore and affect coastal temperatures, he said. This already appears to have happened along the coast of Washington.

NOAA Fisheries is focusing additional monitoring on the new heatwave, designated the Northeast Pacific Marine Heatwave of 2019. NOAA Fisheries’ Southwest and Northwest Fisheries Science Centers will provide fisheries managers and others with information on how the unusually warm conditions could affect the marine ecosystem and fish stocks.

“We learned with ‘the Blob’ and similar events worldwide that what used to be unexpected is becoming more common,” said Cisco Werner, NOAA Fisheries Director of Scientific Programs and Chief Science Advisor. “We will continue to inform the public about how the heatwave is evolving, and what we might anticipate based on experience.”

The new heatwave resembles the early stages of “the Blob.” This previous marine heat wave peaked through 2014 and 2015 with temperatures close to seven degrees Fahrenheit above average.

Like “the Blob,” the new heatwave emerged over the past few months. A ridge of high pressure dampened the winds that otherwise mix and cool the ocean’s surface. The heatwave remains relatively new and is primarily affecting the upper layers of the ocean, it could break up rapidly.

“It looks bad, but it could also go away pretty quickly if the unusually persistent weather patterns that caused it change,” said Nate Mantua, a research scientist at the Southwest Fisheries Science Center.

A key question is whether the new heatwave will last long enough to affect the marine ecosystem. Biologists say that its large size means it probably already has. For example, warmer conditions during “the Blob” left lesser-quality food available to young salmon entering the ocean. It also shifted predator distributions in ways that contributed to low returns of salmon.

Shifts in the marine food web during the evolution of the 2014-2015 marine heatwave called, “the Blob,” forced sea lion mothers to forage further from their rookeries in the Channel Islands off Southern California. Hungry pups set out on their own, but many became stranded on area beaches.

Other impacts linked to the earlier heatwave include:

“Given the magnitude of what we saw last time, we want to know if this evolves on a similar path,” said Chris Harvey, a research scientist at the Northwest Fisheries Science Center.

NOAA Fisheries’ two West Coast laboratories collaborate on the California Current Integrated Ecosystem Assessment. This is a joint effort to track and interpret environmental change off the West Coast. That provides a framework to monitor shifting conditions, Harvey said.

One challenge will be applying lessons learned from the last heat wave to anticipate and mitigate potential impacts of the new one. For example, the warm water of “the Blob” led humpback and other whales to feed closer to shore. Record numbers became entangled in lines from crab traps and other fishing gear.

In response, fishermen, managers, and others have formed working groups in California, Oregon, and Washington. They hope to find ways of reducing the risk of entanglements. 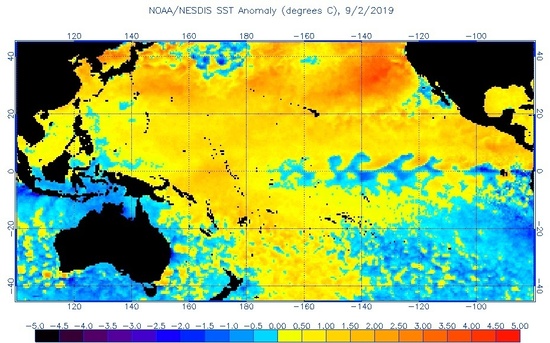 The marine heatwave that has formed off the West Coast of North America is currently close to the warmest area in the Pacific Ocean. Map shows sea surface temperature anomalies, with darker orange representing temperatures farther above average. Image from NOAA National Environmental Satellite, Data, and Information Service.

Real-time research on environmental changes will give managers the details they need to respond, said Kristen Koch, Director of the Southwest Fisheries Science Center. “This is a time when we all need to know how our marine ecosystem is changing, and what that means for those of us who live along the West Coast.”

The new northeast Pacific heatwave reflects current weather patterns. This includes a band of high pressure stretching north to the Bering Sea and Alaska, which have been unusually warm in recent years, said Nick Bond, a research meteorologist with the Joint Institute for the study of the Atmosphere and Ocean in Seattle, a collaboration between the University of Washington and NOAA.

“There are definitely concerning implications for the ecosystem,” said Bond, who is credited with naming “the Blob.” “It’s all a matter of how long it lasts and how deep it goes.”

* * *
We would be at war
"If a foreign nation had launched an attack on America to destroy its coal-fired plants, to shut down its coal mines, and to thwart its ability to drill for oil and natural gas, we would be at war with it." - Alan Caruba
(Click to see entire article)

* * *
CLIMATE REVOLUTION
“We are heading back into the lowest solar activity in at least 400 years,” says David DuByne in this eye-opening eBook.

Click on image to learn how the Solar Minimum will affect society, economy and food prices.
ORDER CLIMATE REVOLUTION NOW
* * *
Warmer than today during most of
the past 10,000 years

Hits since day one: